From The Nature Conservancy 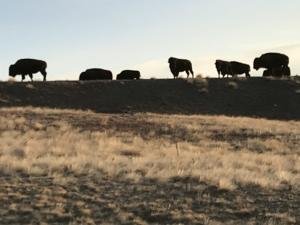 South Dakota have unique genes not found in other herds, and they also show no sign of interbreeding with cattle.

To preserve the Wind Cave herd’s genetic lineage well into the future, the National Park Service needs a population of 1,000

breeding bison. But Wind Cave, which is about one-tenth the size of Yellowstone, is not large enough to sustain that large

That is one of the reasons the Conservancy introduced Wind Cave bison to preserves in Illinois, Indiana, Iowa, Kansas and Missouri.

establish new herds on additional prairies it owns and manages. “With the Conservancy’s satellite herds, we expect

we’ll be able to reach a breeding population of 1,000 bison through this agreement,” said Vidal Davila, park

superintendent. “That would enable us to conserve one of the oldest and most important bison herds in the Great Plains.”