Wildflowers are abundant during the summer at Agate Fossil Beds National Monument.

Fossils and Much, Much More!

Located in remote Northwest Nebraska, Agate Fossil Beds is a destination for paleontologists and explorers! During the 1890s, scientists rediscovered what the Lakota Sioux already knew—bones preserved in one of the world’s most significant Miocene Epoch mammal sites. Agate Fossil Beds National Monument is a landscape that reflects many influences—from early animals roaming the valleys and hills, to tribal nations calling the High Plains home, to explorers passing through or settling in the American West. 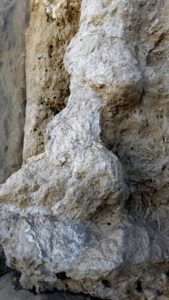 Damonelix aka Devil’s Corkscrew are burrows left behind from ancient beavers. One of the many fossil remains that can be discovered at Agate Fossil Beds.