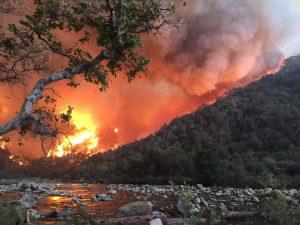 Large fires increased post-fire annual river flow for up to five years, even in areas with recurring drought. USFS photo.
Their findings were published in Nature Communications.
“The impacts of wildland fires on water resources are extremely variable across the U.S.,” says Ge Sun, co-author and research hydrologist. “Our study aims to assist with mitigation strategies that can be designed locally to suit local climate, watershed characteristics, and wildland fire conditions.”
Recent wildland fire seasons are now longer due to recurring drought, more ignition sources, and more fuels. “Our findings show that climatic variability and fire characteristics both affect river flow,” says Hallema. “Therefore regional water management strategies need to be flexible and adaptable.”
The challenge for the near future is to determine where the increased river flow can be treated economically as a source of water and used to reduce drought impacts.
“Forests are key in this discussion, because they provide 50 percent of the water consumed in the lower 48 states,” adds Hallema. “Large wildfires increase river flow across the U.S., and this effect can last for years. River flow increased the most in drier parts of the Lower Colorado Basin, in the Pacific Northwest, and in California.”
“The broad scale of this study enabled the scientists to determine that the annual river flow changed — and in most cases increased — when a fifth of the basin or more was burned by wildland fire.”

Wildfires in 2016 included this one on the Cohutta Wilderness area of the Chattahoochee-Oconee National Forests. Photo courtesy of National Wildfire Coordinating Group.
Increases in water flow can be good and bad. “The good news is that an increase in flow can reduce water supply stress in some areas that are in long term drought,” says Sun. “The bad news is that burned forests can cause immediate water quality problems from soil erosion and sediment during flooding, or long after the fires have occurred. This is especially problematic in watersheds designed for downstream drinking water supply.”
Not all fires affected annual river flow. “In the subtropical Southeast, there was no appreciable change in river flow after prescribed burns,” says Hallema.
“This is because prescribed burns cover a smaller area. While severe wildfires can reduce the ability of the soil to absorb water when it rains because of the intense heat, prescribed burns are not nearly as hot by design. We did not find evidence that prescribed burns affect flow in larger basins.”
Other SRS contributors include research hydrologist Pete Caldwell, research ecologists Steve Norman and Steve McNulty, research meteorologist Yongqiang Liu, and resource information specialist Erika (Cohen) Mack.
This research was funded by the Joint Fire Science Program.