In South Dakota since 1990, the second Monday in October has been observed as Native Americans’ Day. Then-governor George S. Mickelson proclaimed the year 1990 to be the “Year of Reconciliation.” The enacted law states that “Native Americans’ Day is dedicated to the remembrance of the great Native American leaders who contributed so much to the history of our state.”

The day’s programs at Wind Cave were held on the lawn in front of the visitor center.

“We are here on this national holiday to celebrate Native Americans’ Day in South Dakota, also known as Indigenous Peoples’ Day in other parts of the United States,” Welling said.

Welling read a statement issued from the White House, which in part said that on this day, “we honor the sovereignty, resilience, and immense contributions that Native Americans have made to the world; and we recommit to upholding our solemn trust and treaty responsibilities to Tribal Nations, strengthening our Nation-to-Nation ties.”

Welling then introduced Dorothy FireCloud, a member of the Rosebud Sioux Tribe and the current Native American Affairs Liaison for the National Park Service (NPS), a position based in Washington, D.C.

According to NPS, the Office of Native American Affairs “provides guidance and support to NPS field and program managers to strengthen relationships with Native American, Alaska Native, Native Hawaiian, and other indigenous communities.”

FireCloud said that it had been a busy weekend for her, as she attended the 2022 Black Hills Pow Wow in Rapid City, and that herself, Welling, Mount Rushmore Superintendent Michelle Wheatley, and Wind Cave Cultural Specialist Sina Bear Eagle participated in the pow wow’s grand entry on Saturday at 1 p.m. FireCloud provided NPS updates from Washington, which included working to hire more Native American NPS staff and “consulting with tribes to plan new exhibits” at NPS sites.

Oglala Lakota artist Kelly Looking Horse then gave an update on his Lakota Emergence sculpture that is currently under construction inside the Wind Cave visitor center. When completed, it will be more than 20 feet high and span two stories.

“The two-story exhibit will convey the emergence of the Lakota people from Wind Cave, telling the story of the creation of our people,” Looking Horse explained. “Contrary to popular belief, we don’t come from Israel, and we are not one of the seven lost tribes of Israel, we’re from here, right here on this land that Lakotas call sacred. Lakotas believe that we came to the surface through here, through the Wind Cave.”

Darrell Red Cloud, the “fifth blood descendant” of Lakota Chief Red Cloud, then presented stories on the cultural significance of Wind Cave and relayed the Lakota origin story to the audience. “All life comes from Mother Earth, we all say that we are from here, Wind Cave,” Red Cloud reiterated.

The day ended with a hoop dance performance by Starr Chief Eagle, a member of the Rosebud Sioux Tribe and regular participant in the World Championship Hoop Dance Contest in Phoenix, Ariz.

Chief Eagle said that she was taught hoop dancing at a very young age by her father, Dallas Chief Eagle, and that the 22 hoops she uses to dance tell the story of her life. Before Chief Eagle’s ending performance, members of the audience tried their best to participate in hoop dancing themselves.

Funding for the event was provided by the Black Hills Parks and Forests Association, a non-profit partner of Wind Cave National Park. 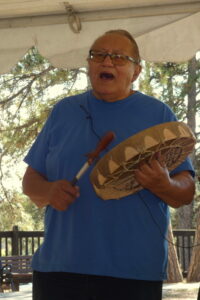 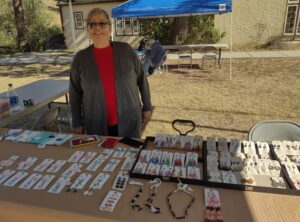 Liz Anderson traveled all the way from northeast South Dakota to sell her beadwork and shellwork at Wind Cave’s Native Americans’ Day celebration. Anderson is a traditional Dakota artist and lives in Sisseton. 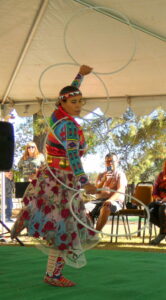 Starr Chief Eagle performing a hoop dance at the event. 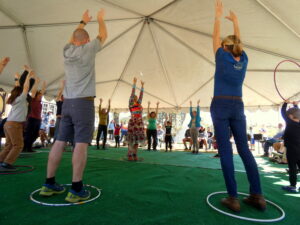