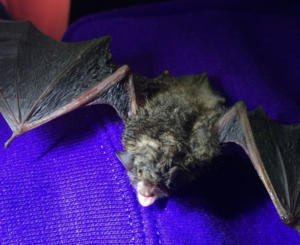 In the course of genomic analyses of P. destructans, a team of scientists from the U.S. Forest Service, U.S. Department of Agriculture and the University of New Hampshire found that the fungus is highly sensitive to UV light. P. destructans can only infect bats during hibernation because it has a strict temperature growth range of about 39-68 degrees Fahrenheit. However, treating bats for the disease during hibernation is challenging, so any weakness of the fungus may be good news to managers trying to develop treatment strategies.

In a study published on Jan. 2 in the journal Nature Communications titled “Extreme sensitivity to ultra-violet light in the fungal pathogen causing white-nose syndrome of bats,” the research team suggests that P. destructans is likely a true fungal pathogen of bats that evolved alongside bat species in Europe and Asia for millions of years, allowing Eurasian bats to develop defenses against it. In the course of comparing P. destructans to six closely related non-pathogenic fungi, researchers discovered that P. destructans is unable to repair DNA damage caused by UV light, which could lead to novel treatments for the disease. The study, which was funded by the U.S. Fish and Wildlife Service, is available at: https://www.nrs.fs.fed.us/pubs/55557

“This research has tremendous implications for bats and people,” said Tony Ferguson, Director of the Forest Service’s Northern Research Station and the Forest Products Laboratory. “Bats play a key role in the health of forests as well as the production of food in the United States, and developing an array of tools with which we can treat bats for white-nose syndrome is important to preserving these very important species.”

The research team generated annotated genomes for P. destructans as well as six non-pathogenic Pseudogymnoascus species in an effort to gain insight into the origins and adaptations of the fungal pathogen of WNS. Using comparative genomics, the research team noticed that P. destructans lacked a key DNA repair enzyme, prompting them to expose the fungi to DNA damaging agents, including different wavelengths and intensities of UV light. They found that a low dose exposure of UV-C light resulted in about 15 percent survival of P. destructans while a moderate dose exposure resulted in less than 1 percent survival. These values translate to only a few seconds of exposure from a hand-held UV-C light source.

“It is unusual that P. destructans appears to be unable to repair damage caused by UV-light,” said Jon Palmer, a research botanist in the Northern Research Station’s lab in Madison, Wis., and the lead author of the study. “Most organisms that have been found in the absence of light maintain the ability to repair DNA caused by UV light radiation. We are very hopeful that the fungus’ extreme vulnerability to UV light can be exploited to manage the disease and save bats.”

“White-nose syndrome is the single biggest threat to many North American bat species and one of the most pressing conservation challenges facing America’s wildlife today,” said Jeremy Coleman, national white-nose syndrome coordinator, U.S. Fish and Wildlife Service. “Investing in defeating WNS must be a priority, and the results from this study and contributing research give us hope that we can develop the tools to more effectively manage the fungus that causes the disease.”

Research on potential treatment using UV light is under way. Daniel Lindner, a research plant pathologist with the Northern Research Station in Madison and the corresponding author on the study, is leading follow-up research to determine if UV-light can be used as a treatment for bats suffering from white-nose syndrome. The study will measure the survival of little brown bats during hibernation after being treated with UV-light compared to control groups. The researchers are also exploring whether there are any non-target effects by measuring changes in the bat skin microbiome (both fungal and bacterial communities). The study, which is funded by a grant from the, National Fish and Wildife Foundation, Bats for the Future Fund began late last year.

Co-authors on the study include Kevin P. Drees and Jeffery T. Foster of the University of New Hampshire.
###
The mission of the Northern Research Station is to improve people’s lives and help sustain the natural resources in the Northeast and Midwest through leading-edge science and effective information delivery.
###
The mission of the U.S. Forest Service, an agency of the U.S. Department of Agriculture, is to sustain the health, diversity and productivity of the nation’s forests and grasslands to meet the needs of present and future generations. The agency manages 193 million acres of public land, provides assistance to state and private landowners, and maintains world-renowned forestry research and wildland fire management organizations. National forests and grasslands contribute more than $30 billion to the American economy annually and support nearly 360,000 jobs. These lands also provide 30 percent of the nation’s surface drinking water to cities and rural communities; approximately 60 million Americans rely on drinking water that originated from the National Forest System.
###
USDA is an equal opportunity provider and employer. To file a complaint of discrimination, write to USDA, Assistant Secretary for Civil Rights, Office of the Assistant Secretary for Civil Rights, 1400 Independence Avenue, S.W., Stop 9410, Washington, DC 20250-9410, or call toll-free at (866) 632-9992 (English) or (800) 877-8339 (TDD) or (866) 377-8642 (English Federal-relay) or (800) 845-6136 (Spanish Federal-relay).