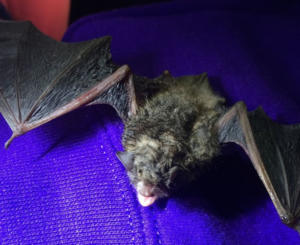 Northern Research Station Research Wildlife Biologist Sybill Amelon, University of Missouri scientists, and scientists in the Czech Republic began with a research question: why is white-nose syndrome (WNS) decimating hibernating bat populations in North America but causing low mortality for bats in Europe? The first challenge was to create a universal grading system that would allow a researcher to determine the severity of skin lesion samples from a small biopsy sample of a bat’s wing.
Previously, the standard testing procedure required an entire bat’s wing to be used when searching for the WNS fungus. This could only be done on a bat that had succumbed to the disease or had been euthanized, and after losing millions of bats to WNS, researchers were eager to find a nonlethal method to assess diagnostic pathology and scoring of WNS infections.
“Some bat species are being considered for federal listing as threatened or endangered entirely due to the numbers of bats killed by white-nose syndrome,” Amelon said. “Losing more bats in the course of research is something that we all want to avoid. The method that we developed gives scientists an alternative that does not require a great deal of expensive equipment, does not require extensive training to use, and is accurate.”
Amelon and her colleagues used ultraviolent light to trans-illuminate bats’ wings. Trans-illumination of a wing membrane with ultraviolet light elicits a distinct orange-yellow fluorescence that corresponds directly with WNS fungal erosions in affected areas of a bat’s wing membrane and allows a small biopsy to be taken of the WNS affected bat wing. Photographs of trans-illuminated wing membrane provide lasting documentation of WNS damage and severity, so scientists can use it to track an individual bat’s recovery from WNS as well. To demonstrate how easy it is to score the severity of WNS using photographs, researchers asked veterinary students in the Czech Republic to score the severity of WNS based on photographs of 30 bat wings with just 45 minutes of training; their scores aligned with scoring by seasoned pathologists 95 percent of the time.
“Our comparison of bats infected with the fungus that causes white-nose syndrome in North America and in Europe is showing differences in the prevalence, fungal load, and effects on bats’ skin,” Amelon said. “The development and validation of a nonlethal method for comparing WNS severity is enhancing our ability to research WNS and we think it is something that can be used by scientists worldwide.”