BHPFA collaborates with The Nature Consevancy and Charley Harper Studios 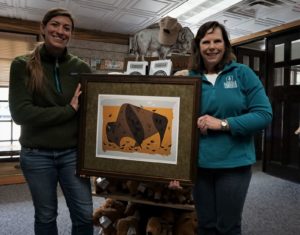 Since launching in 2018, Black Hills Parks & Forests Association (BHPFA)’s Adopt-A-Bison program has been greatly successful. They have raised close to $35,000 for the conservation of Wind Cave National Park’s bison herd. The funding has provided ten GPS radio collars that will help park biologists’ better understand movement patterns of female bison.

“This was such an exciting project to work on and is a perfect partnership for BHPFA. We are honored to present this rarely seen Charley Harper image to the public for the benefit of this unique bison herd,” states BHPFA Director Patty Ressler. BHPFA is proud to partner with Wind Cave National Park and The Nature Conservancy in supporting the conservation and genetic diversity of their bison.